Have to say I was surprised to hear of the venue for our Wamfest show. Grand Casual will kick it at the Lot Party which is basically a mini Festival setup in the heart of Perth. Checked it out last year grand setup. Also stoked to catch up with the lads from The Tapping Stickz who are right there alongside us. If you’re Perth ways Nov 3rd make sure to head in for some super casual tunes.

Full press release from WAM below!!! 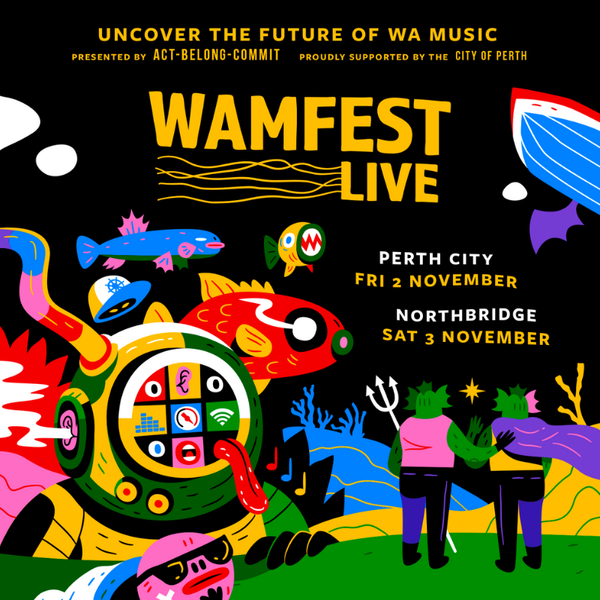 WAMFest presented by Act-Belong-Commit and proudly supported by the City of Perth is back to prove the future of WA music is brighter and bolder than ever, with hundreds of local acts set to impress crowds this November across a series of FREE live music events.

Having just revealed the first 32 local acts kicking off festivities as part of WAMFest Live Friday’s showcases in the City of Perth, WAM are proud to welcome another 116 ground-breaking WA artists to the bill as we unveil more on WAMFest Live Saturday’s electrifying program of live music taking over 17+ stages throughout Northbridge.

This year’s WAMFest Live Saturday schedule will see Northbridge oozing music from every orifice, with traditional live music venues and multiple outdoor stages all hosting free live showcases throughout the day and late into the night.

Just around the corner you can chill out to sets from solo performers in the Yagan Square Auditorium or head to the Perth Cultural Centre Amphitheatre to soak up feel-good vibes from the likes of Your Girl Pho, Almond Soy, The Hunting Birds and more. With both these outdoor stages open to punters of all ages.

If venues are more your vibe, there are plenty opening their doors for carefully curated WAMFest Live showcases, including The Bird, Nevermind Small Club, Universal Bar, The Mustang Bar, The Boston, Badlands Bar, Paper Mountain, The Court, The Brass Monkeyand more to be announced.

WAMFest Live Co-coordinator Mark Neal said, “This year’s WAMFest Live lineup is a true testament to the phenomenal talent growing in WA. We were absolutely blown away by the quality of applications this year and can’t wait for punters to uncover more of the musical gems hiding in our own backyard.”

With more than 25,000 predicted to attend, this is your chance to be part of the biggest local music event of the year! Don't miss this opportunity to uncover the future of WA music at WAMFest Live from Friday 2 to Saturday 3 November, with more events kicking off in regional WA and Perth suburbs in the surrounding weeks still to be announced. Stay tuned for the full lineup and schedule.

Hannah Mae and the Hoodwinks

Seasta Chani and the Twilight Heist

WAMFest presented by Act-Belong-Commit, and proudly supported by the City of Perth